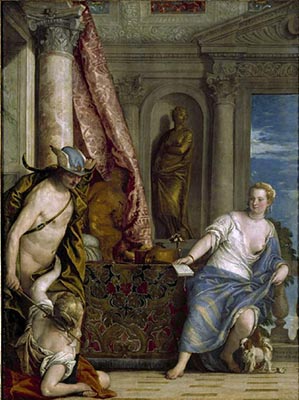 In Greek mythology HERSE is the daughter of Selena (Moon) and Zeus, the King of Olympian Gods. Her name means dew and God Hermes fell in love with her and married her. According to the famous Roman poet Ovid, she was daughter of Aglavros, (the deity of the Lucent Aurora) and Cecrops, the wise primal King of Athens, who invented marriage. Ovid writes in his magnum opus, the Metamorphoses, that when God Hephaestus was avoided erotically by Goddess Athena, she directed his desire to the ground, thus impregnating Gaia (Earth). The child was born intertwined with a serpent, symbolizing both the beginning of life on solid earth, out of water, and its origin, the womb of mother Earth. The Goddesses of Wisdom Athena wanted to make the infant immortal and to raise it, so she placed the newborn child in a willow basket and entrust- ed it to HERSE and her sisters. Athena forbid them to look in the basket, in order to protect the mystery of the infant’s nature. Still, one of the sisters disobeyed, and peeked in the basket. At that time, God Hermes was in love with HERSE and went to ask her to marry him. Her sister agreed with him to deliver to HERSE the divine message, in exchange for gold. Athena though, annoyed because the mystery had been bespoken by HERSE’s sister, ordered the Goddess Eris (Envy) to deprave her. The sister overwhelmed with jealousy blocked the door to HERSE’s room, refusing to move away. Hermes, angry at her for breaching their agreement, transformed her into a black marble statue and proceeded with his wedding with HERSE. The ancient Athenians used to dedicate shrines to HERSE and worship her around the Acropolis.

Sign up now with HERSE and get a 10% off from your next purchase.